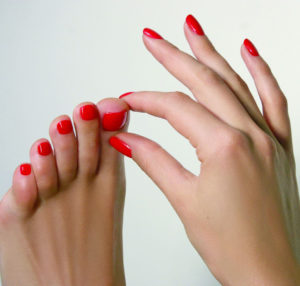 Nail Polish “should you or shouldn’t you?”

Nail polish safety is an important topic not only for consumers but also for industry professionals. Nail polish dates to around 3000 BC in China, it was used in Egypt, and popularized by Revlon in the 1960’s. In today’s market they shimmer, shine, glow, glitter, and more all capture our attention.

First what is nail polish? It may seem like a little small bottle of color but it is so much more. It is a mixture designed to coat, stick, and shine on a nail bed.

Nail polish is a suspension liquid, which is a liquid where there are solid particles held in suspension by the liquid molecules. This means that over time the solid parts, such as pigments, will separate from the liquid. This is why all polishes have a steel ball bearing in them so they can be adequately mixed back to its intended composition.

Since nail polish was popularized in the 1960’s many components thought safe have been proven otherwise. Product replacement has been a hot topic in many industries not just cosmetic and beauty products. The goal is to replace a hazardous ingredient with a much safer one. 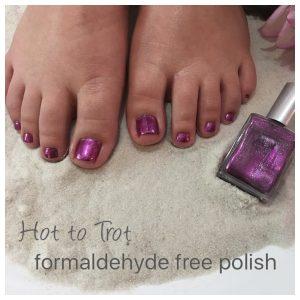 Ingredient substitution to replace harmful ingredients with much safer ones has been a trend in the cosmetic industry for many years. With the rise in manicures and pedicures, this has naturally extended to the nail care industry. Currently there are 10 toxic substances to avoid in nail polishes. This applies to the consumer as well as professional that may do upto 15 manicures and pedicures in a day.

Nail Polish, Is it Safe?

The question of is it safe is always a difficult one to answer directly. For products like nail polish as well as current chemical processes ingredient replacement is one of the trends to improve safety. This is aimed at reducing exposure times to very

harmful substances. Science is a living breathing thing and as more data becomes available more ingredients may be substituted and replaced, but for today keeping these toxic 10 out of our polish is an important decision.

Even though some of these ingredients may be used today as the science is still young on their effects, but here at Calla Lily all of our polishes are free from these toxic 10 ingredients. We offer over 40 colors that make up our classic line and 10 colors in our Blooming Beauty line specifically “crafted for adventurers”. They are child safe, cruelty free and vegan!